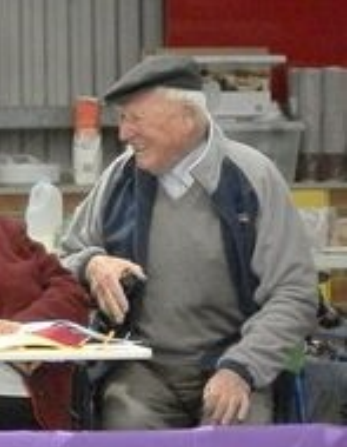 
I first became acquainted with Allan in the early 80’s prior to us moving to Australia and taking up residence in Melbourne. Allan had judged a Specialty in NZ in the early 80’s at which I was lucky enough to win both Reserve CC’s …

I remember joking with him at the after show function “that he could have at least given me 1 of the CC’s”. One thing that stood out on that initial meeting and has been echoed by many in the ensuring years is – what a gentleman Allan always was.

A founding member of the Cavalier KCS Club of Victoria, Allan was also President for a period of 10 years from 1975. Of course he was also a Life Member of many years standing.

​Prior to Cavaliers taking over Allan was also a staunch enthusiast of the Irish Setter and had great success showing them although not actually breeding them.

Ch. Gaycav Lively Anne (born in 1972) was the first Cavalier KCS owned by the family (bought for daughter Shirley). “Anne” was to be the foundation of “Vauntifiere” Cavaliers and was herself a Specialty BIS winner at the Victorian Specialty in 1977 under Mr. Roger Bridgford.

Some of the well-known winners bred by Allan and his late wife Sylvia under the Vauntifiere prefix include Champions Tawie, Oriana, Aquadubs, Rhapsody to name a few and the last homebred BIS winner Ch. Vauntifiere Spellbound who was the sire of the final Vauntifiere litter born in 2000.

His judging career as a respected All Breeds judge took him around the Globe and judging was something that Allan always enjoyed and took very seriously. I know he was very grateful for the opportunities afforded him as a Judge which he always felt was an honour.

Raewyn & I were pleased to be able to call Allan (and Sylvia) friends … and in the last 10 years or so we were privileged to be able to assist Allan with having much loved companions with him at their home in Mt Waverley.